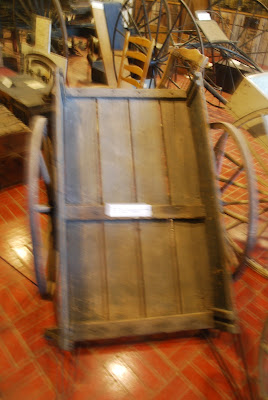 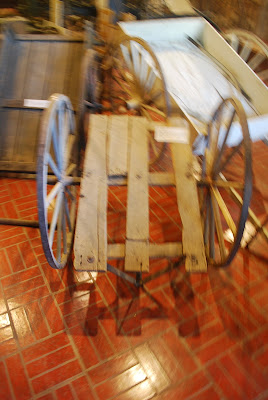 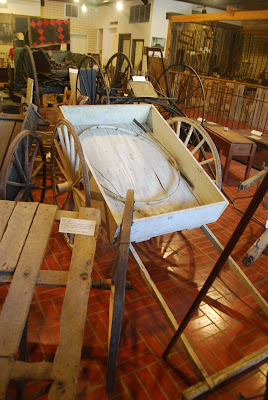 The have three handcart at the DUP museum.  I thought handcarts were sturdier and larger than those represented.  I think the ones used for treks, and museums are larger; but these are handcarts used originally.  I am not sure if any of the Martin Company survived--as all were left behind and the Saints entered the Valley in wagons.  I know they were built to have the same wheel base as wagons, but it looking at them, and comparing them to wagons, the appeared skinny to me.
Posted by Billy Wardle at 11:02 PM No comments:

Church History: scribo to Zundle
This section of papers includes some interesting writings,  Most Importantly it has excerpt from one of the autobiographies of Isaac Wardle.  Of interest, which I hadn’t noticed before, is Isaac’s description of himself.  “Being a stron[g] man and having no relatives in the company I took a sick young man (eighteen years old) in my cart.”  I had not noticed that Isaac referred to himself as a “strong man.”  Isaac would learn that being a strong man could be a curse, as he was often asked to do extra tasks.  In his history he notes that he helped to bury many of those who passed away.
This (under the name scribe, tells the story of James Bleak.  He was a branch president who was promised by the gift of tongues, that not one of the family would be lost.  One morning, their son was discovered dead.  Brother Bleak worked on him for some time, with the assurance and promise not one would be lost.  He recovered, and eventually became an old man in Salt Lake.
This section includes a couple discourses from Brigham Young.  One he explains that had he been in the Midwest, the tragedy would not have ahppenned as he would not have let the pioneers travel so late in the season.  The Shoshone Mission journal is interesting becaue it talk of men already on the plains, who were called to help the rescue.
Sister Alice Walsh Strong talks about the hardship of guarding every night, and the toll this took on the men.  Her own husband passed away.
Brother Joseph Wadsworth of the rescuers offers this description of the Martin Handcart Company at fort Bridger.  “This was the saddest sight I have seen. The biggest part of them were given out and nearly frozen to death; some with their feet frozen, some with their hands frozen. It was a sight that would make one's heart ache just to look at them.”
A couple of the articles in this section seem to belong with the Willie Company.
Posted by Billy Wardle at 9:09 PM No comments: