My Mom and I: Common Activity

My mom would often play for me as I sang.  During primary days a common song I sand was "I Wonder When He Comes Again" and in High School it was "My Task."  I enjoyed singing both those songs.  When I was at the Boys Ranch she played for me then as well.  This was for a Christmas program.  I sang "Long Time Ago in Bethlehem."  I know there have been other songs through the years.  Often she would just play and I would sing.  It was fun.  At one point my mom attempted to teach me to play the piano.  If I had been a better student, I would be more proficient.  My mom would later play for almost ten years at the Logan Temple.  Now they have programmed songs, but she would play whenever she had a chance. 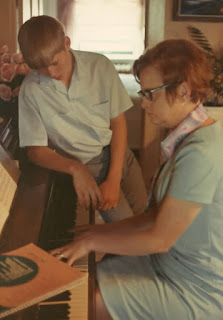 Posted by Billy Wardle at 7:50 PM No comments:

Email ThisBlogThis!Share to TwitterShare to FacebookShare to Pinterest
Labels: my mother, piano, singing

This picture was taken when we visited Uncle Norval and Aunt Delsa in Ames, Iowa.  Norval is the son of William Haston Wardle.  He was living in Iowa teaching at the university.  He was a safety engineer.  This was likely 1967.

Posted by Billy Wardle at 9:59 PM No comments: