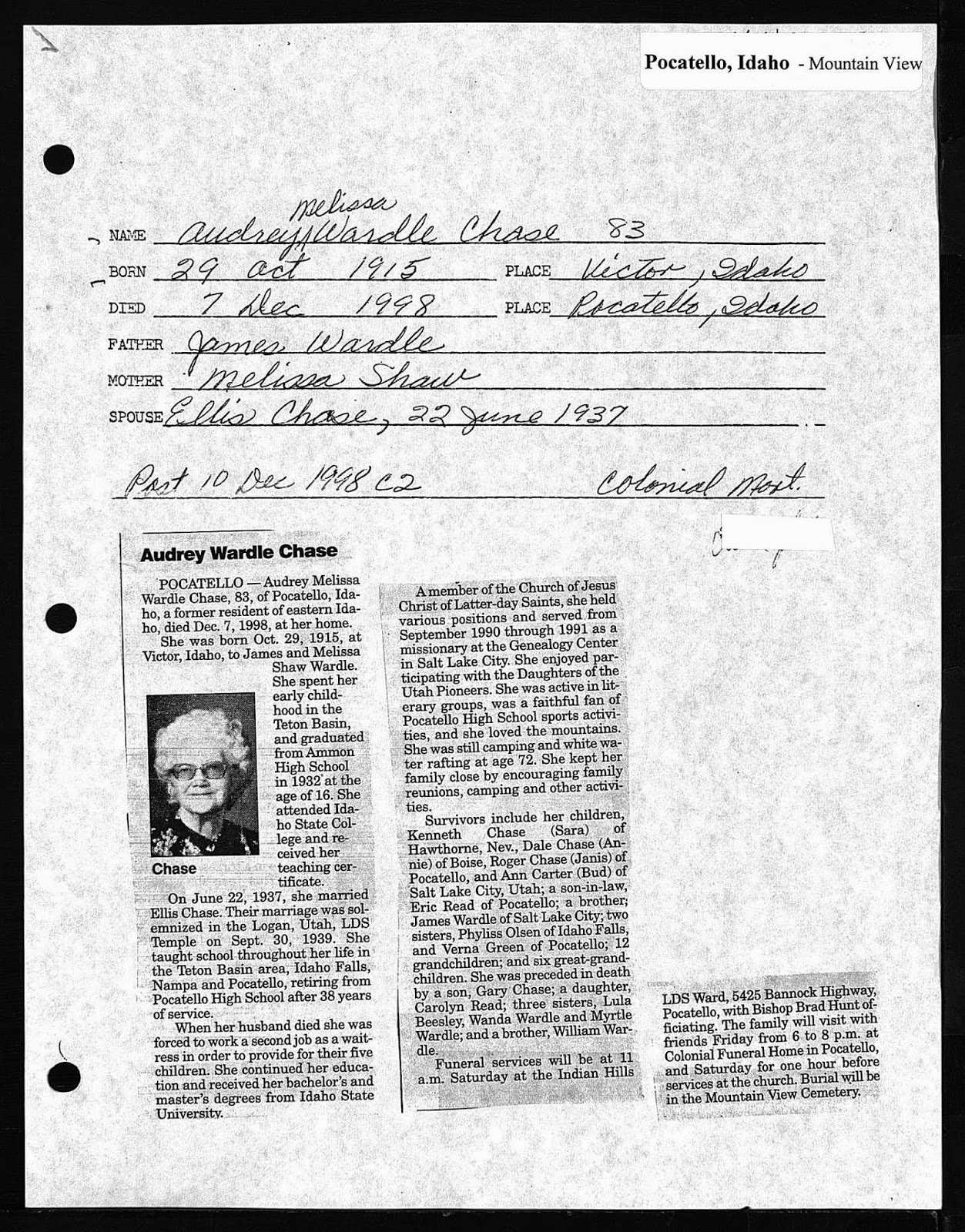 This is a source from familysearch.org

Obituaries Post Register (Idaho Falls, ID) | 10 December 1998 POCATELLO - Audrey Melissa Wardle Chase, 83, of Pocatello, Idaho, a former resident of eastern Idaho, died Dec. 7, 1998, at her home. She was born Oct. 29, 1915, at Victor, Idaho, to James and Melissa Shaw Wardle. She spent her early childhood in the Teton Basin, and graduated from Ammon High School in 1932 at the age of 16. She attended Idaho State College and received her teaching certificate. On June 22, 1937, she married Ellis Chase. Their marriage was solemnized in the Logan, Utah, LDS Temple on Sept. 30, 1939. She taught school throughout her life in the Teton Basin area, Idaho Falls, Nampa and Pocatello, retiring from Pocatello High School after 38 years of service. When her husband died she was forced to work a second job as a waitress in order to provide for their five children. She continued her education and received her bachelor's and master's degrees from Idaho State University. A member of the Church of Jesus Christ of Latter-day Saints, she held various positions and served from September 1990 through 1991 as a missionary at the Genealogy Center in Salt Lake City. She enjoyed participating with the Daughters of the Utah Pioneers. She was active in literary groups, was a faithful fan of Pocatello High School sports activities, and she loved the mountains. She was still camping and white water rafting at age 72. She kept her family close by encouraging family reunions, camping and other activities. Survivors include her children, Kenneth Chase (Sara) of Hawthorne, Nev., Dale Chase (Annie) of Boise, Roger Chase (Janis) of Pocatello, and Ann Carter (Bud) of Salt Lake City, Utah; a son-in-law, Eric Read of Pocatello; a brother, James Wardle of Salt Lake City; two sisters, Phyliss Olsen of Idaho Falls, and Verna Green of Pocatello; 12 grandchildren; and six great-grandchildren. She was preceded in death by a son, Gary Chase; a daughter, Carolyn Read; three sisters, Lula Beesley, Wanda Wardle and Myrtle Wardle; and a brother, William Wardle. Funeral services will be at 11 a.m. Saturday at the Indian Hills LDS Ward, 5425 Bannock Highway, Pocatello, with Bishop Brad Hunt officiating. The family will visit with friends Friday from 6 to 8 p.m. at Colonial Funeral Home in Pocatello, and Saturday for one hour before services at the church. Burial will be in the Mountain View Cemetery. Copyright &#169; 1998 Post Company Record Collection: Wiki LinkUnited States, GenealogyBank Obituaries, 1980-2014
Posted by Billy Wardle at 8:57 PM No comments:

Serving in the Temple

Weekend of 3/6-3/815  This weekend was a temple work weekend.  Charity, Mom, Natalia, Ty and I went to the temple for sealings.  In all we did about 110 total (another group took some of our names so we could get them done).  It was fun.  We saw many people we know.  The Nelsons (formerly of Northland Ward and now Union Ward (he taught gospel doctrine before I did) were there.  Ron Cieslak of the Stevens Creek ward was also there (he may have moved before you would remember but was close to the youth Natalia’s age.)  Later we had Steve Orton and his wife join us.  It was a pretty fun evening with lots of work done.
The youth and the Elders did baptisms Saturday and I sent names.  I figure about 55 names so between baptisms and confirmations that is another 110 ordinances.  So it was a very active weekend in the temple.  I always have a few ordinances being done on those I have shared with the temple as well.  I think a record with may 230 ordinances completed.  This has been my most active weekend, and since the sealing is the last ordinance these are all the way done.  We are now working on putting together another session by completing the preliminary work.  I have more than enough names, but we have to do the other work done first.  Natalia and Ty took names home to do in Washington.
Posted by Billy Wardle at 9:02 PM No comments:

I have been working on my genealogy, connecting sources to different individuals.  In doing so, I came upon the obituary for Aunt Ruth, which surprised me as it said she had a son.  Aunt Ruth is actually my great aunt, my mother's aunt.  She lived with my grandmother for a time, which resulted in us kids receiving many kisses form her.  Her kisses were always slobbery aunt kisses.
Her life was one of love and tragedy. 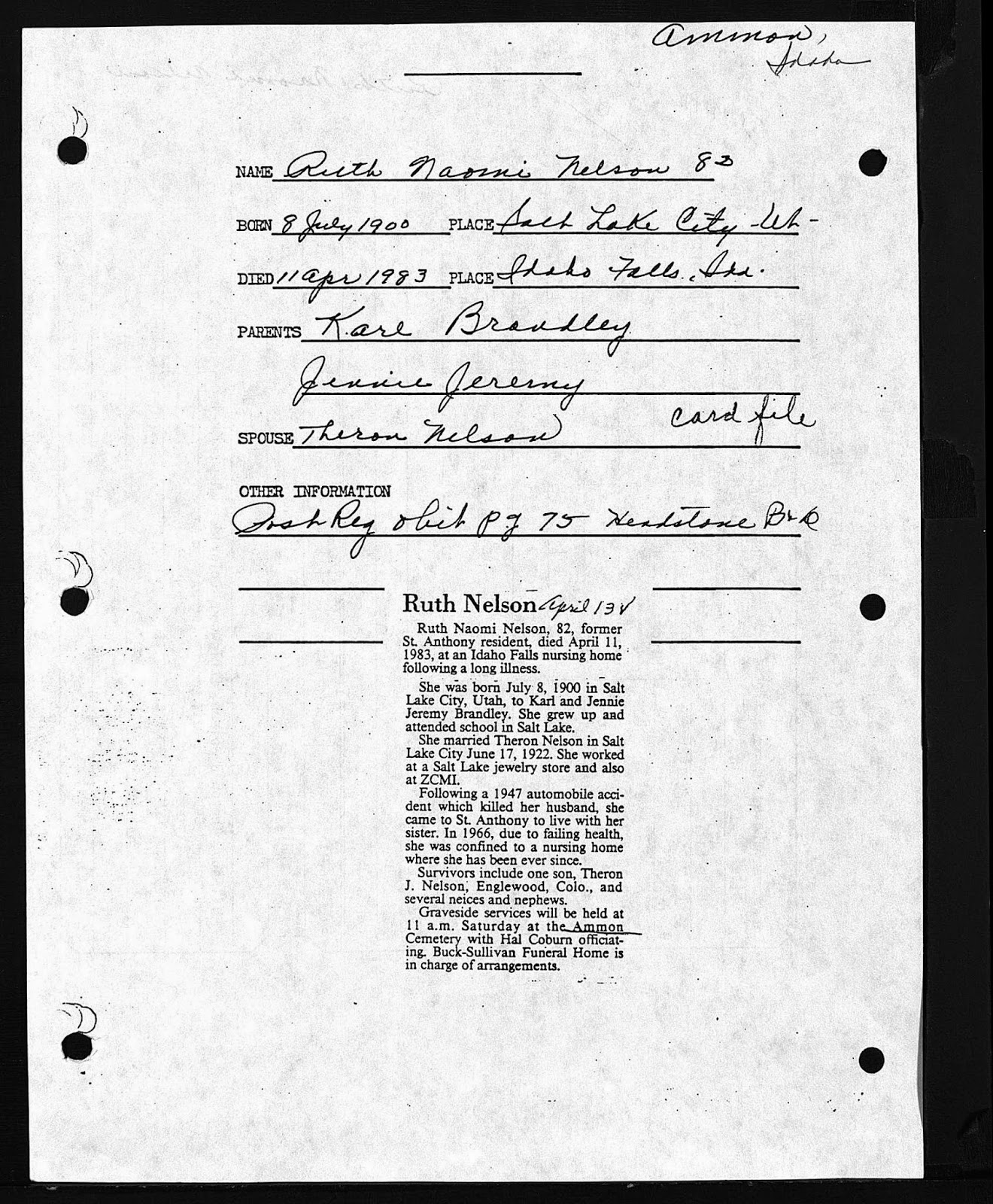 I have talked to several people about Aunt Ruth, including my mother and Aunt Charlene, who would be her nieces.  Connie says my mother told her the story, and she provided some good information.
Aunt Ruth was born to Karl (Carl) Brandley and Jane Jeremy in Salt Lake.  She married Theron Nelson in 1922.  Their son Theron Jeremy was born in about 1925 in Salt Lake.
Her husband worked for a publishing company selling books.  This would require him to be on the road considerable, but allowed for a comfortable lifestyle.  Aunt Charlene said they lived in an "exquisite apartment" in Salt Lake.  Mom said they would not see them often, about every two or three years because the lived in Salt Lake, while she lived in Idaho.  Theron their son was about five years older then mother, and mother does remember playing with him.
Tragedy struck the Nelson home in 1947 when Theron was killed in an automobile accident in 1847.  Aunt Ruth made application for Theron's tombstone through Veterans as he was a WWI veteran. 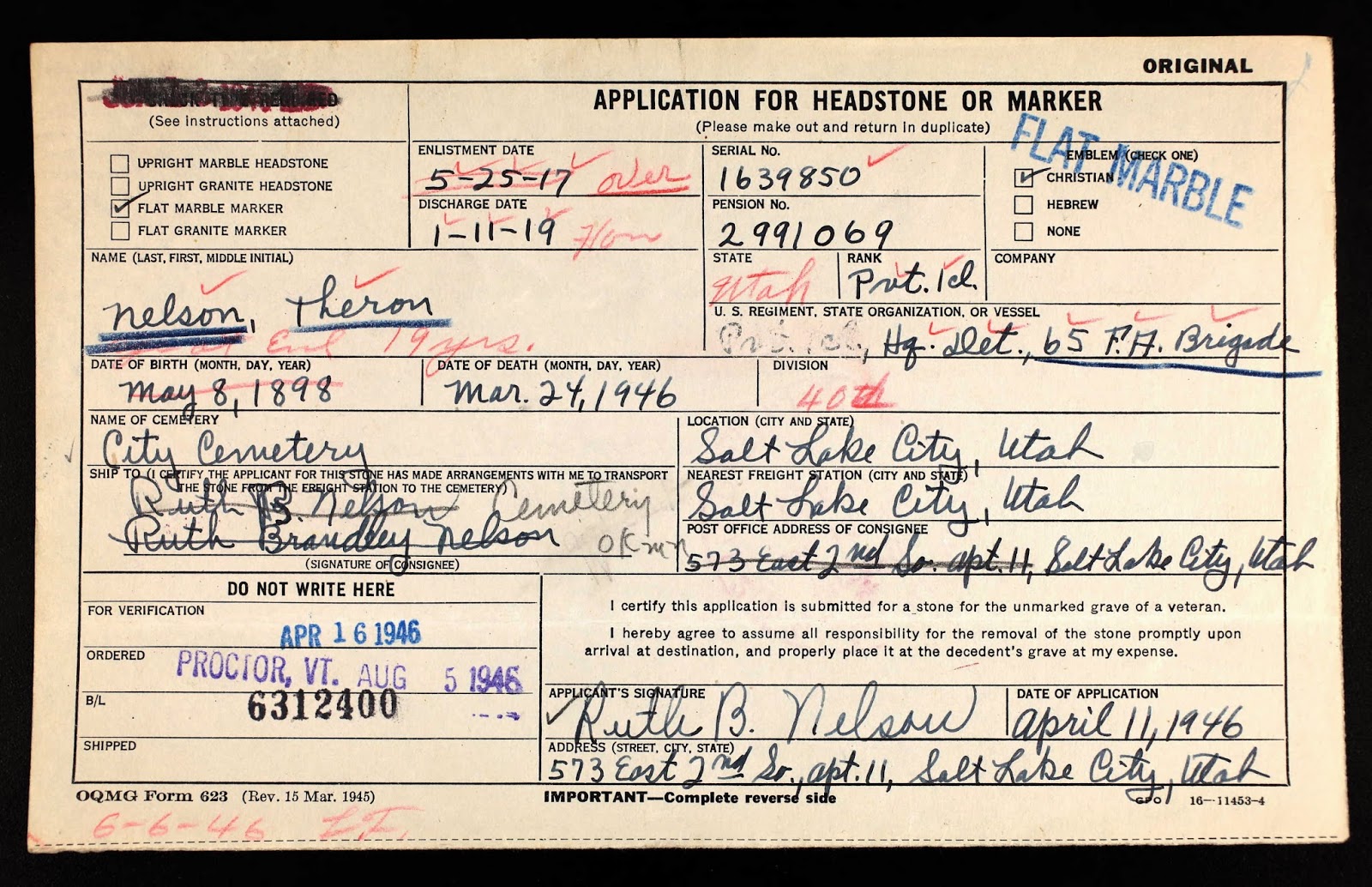 After her husband's death, Aunt Ruth became a different person.  She took up drinking.  Aunt Charlene described this as "She lived a different lifestyle, drank and carried on."  Connie says that the story goes that one night when she was drinking, a man in a bar hit her in the nose, breaking her nose.  This is why her  nose was always so large.  However Connie says this also caused brain damage and she had a poor memory after this.
Aunt Ruth took up with and married a younger man.  Connie says he was a sailor.  Aunt Charlene confirms this story.  However she says the tombstone for Aunt Ruth bears the last name Nelson, and she can't remember this person's name.
He exploited Aunt Ruth, and took her money, and then left her with nothing.  After this Aunt Ruth was very poor.  She came to live with her sisters, Aunt Marie Brandley Coburn in Saint Anthony, and my Grandmother, Geneve Brandley Wright in Lincoln, Idaho Falls.  At some point her son disowned her.  This was due to her driniking and taking up with another man.  He eventually settled in Colorado.  Aunt Charlene laments that he didn't even come to the funeral.  However she thinks he made arrangement through a funeral home.  Connie remembers that Aunt Rose Marie (Mom's sister) made most of the arrangements for the funeral.
Aunt Charlene said she most often lived with Aunt Marie.  However she also would stay with Grandma for extended periods.  One of these periods was when we as a family spent five months living with Grandma in Lincoln.  Her bedroom was the first on the right as you entered Grandma's house from the rear door.  It was across from the bathroom.  Sara remembers that Aunt Ruth had lots of jewelry.  However she isn't sure if it was real or glass jewelry.
Connie remembers that Aunt Ruth had a granddaughter.  She would  call her Bunny.  Connie thinks she came to visit because Aunt Ruth had a picture of her she displayed in her room and she would share with people.  Connie said Aunt Ruth's memory was such she couldn't remember names, and would call everyone bunny.  She actually had two grandchildren, Penelope Jane Nelson (Penny) and Theron Jeffrey Nelson.   Theron Jeffrey passed away in 2009 and his father Theron Jeremy in 2012.
Connie says there was at least one occasion when Aunt Ruth was hitting on Grandmother.  This may have been the result of drinking.  Connie also visited Aunt Ruth at the Blackfoot State Hospital. "The last time I saw Aunt Ruth Mom and I visited her at the the State Hospital in Blackfoot.  Jed was a baby.  All of the patients wanted to touch Jed he was so cute."  The obituary indicates that she passed away in a nursing home in Idaho Falls.  This was several years after Grandmother had passed away.
Connie says, Aunt Ruth lived with Grandma many years.  However Aunt Charlene remembers she mostly lived with Uncle Elmo and Marie Coburn in Saint Anthony.  Aunt Ruth's nephew officiated at her funeral.  She was often at Grandmother's when we visited.

Posted by Billy Wardle at 8:10 PM No comments: