Dad was in the local Logan Newspaper a couple of times, for stealing books from the USU library where he use to work.  Charlie has put together a very nice history entitled "Dad's Downfall" and he found these as part of his research.  The transcription is also his.  One article is very hard to read.  Charlie's history of my father is very well done, and I would suggest you contact him about getting a copy. 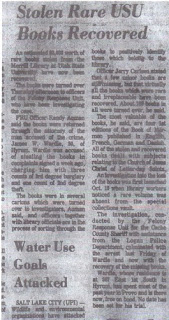 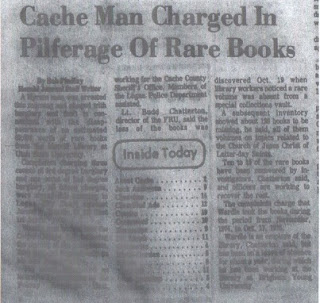 Stolen Rare USU Books Recovered             Dec. 7, 1975
An estimated $8,000 worth of rare books stolen from the Merrill Library at Utah State University have now been recovered.
The books were turned over Thursday afternoon to officers of the Felony Response Unit, who have been investigating the case.
FRU Officer Randy Aurman said the books were returned through the attorney of the man accused of the crime, James W. Wardle, 50, of Hyrum. Wardle was accused of stealing the books in complaints signed a week ago, charging him with three counts of 3rd degree burglary and one count of 2nd degree theft.
The books were in several cartons which were turned over to investigators, Aurman said, and officers together with library officers are in the process of sorting through the books to positively identify those which belong to the library.
Officer Jerry Carlsen stated that a few minor books are still missing, but the virtually all the books which were rare and Irreplaceable have been recovered. About 100 books in all were turned over, he said.
The most valuable of the books, he said are four 1st editions of the Book of Mormon published in English, French, German and Danish. All of the stolen and recovered books dealt with subjects relating to the Church of Jesus Christ of Latter-day Saints.
An investigation into the loss of the books was first launched Oct. 19 when library workers noticed a rare volume was absent from the special collections vault.
The investigation, conducted by the Felony Response Unit for the Cache County Sheriff with assistance from the Logan Police Department, culminated with the arrest last Friday of Wardle and now with the recovery of the missing books.


Wardle whose residence is at 587 East 1st South in Hyrum has spent most of the past year in Provo and is there now, free on bond. No date has been set for his trial.

Cache Man Charged In Pilferage Of Rare Books       Dec 1, 1975
By Bob Findlay
Herald Journal Staff Writer
A Hyrum man was arrested this morning and charged with burglary and theft in connection with the disappearance of an estimated $8,000 worth of rare books from the Merrill Library at Utah State University.
Complaints charging three counts of 3rd degree burglary and one count of 2nd degree burglary, all felony charges, were signed this morning in Logan City Court against James W. Wardle, 50, 587 East 1st South.
Wardle was booked into the Cache County jail following the signing of the affidavits, then released __________ on his own recognizance.
The arrest concluded an intense investigation by the Felony Response Unit, working for the Cache County Sheriff's Office. Members of the Logan Police Department assisted.
L.T. Budd Chatterton, director of the FRU, said the loss of the books was discovered Oct. 19 when library workers noticed a rare volume was absent from a special collection vault.
A subsequent inventory showed about 120 books to be missing, he said all of them volumes on topics related to the Church of Jesus Christ of Latter-day saints.
Ten to 15 of the rare books have been recovered by investigators, Chatterton said, and officers are working to recover the rest.
The complaints charge that Wardle took the books during the period from November, 1974 to Oct., 17, 1975.
Wardle is an employee of the library, Chatterton said, but has been on a leave of absence for about a year, during which he has been working at the library at Brigham Young University.

Posted by Billy Wardle at 7:50 PM No comments: