My son, who is serving a mission in the Des Moines, Iowa Mission visited the Handcart Park in Iowa City and took these pictures. 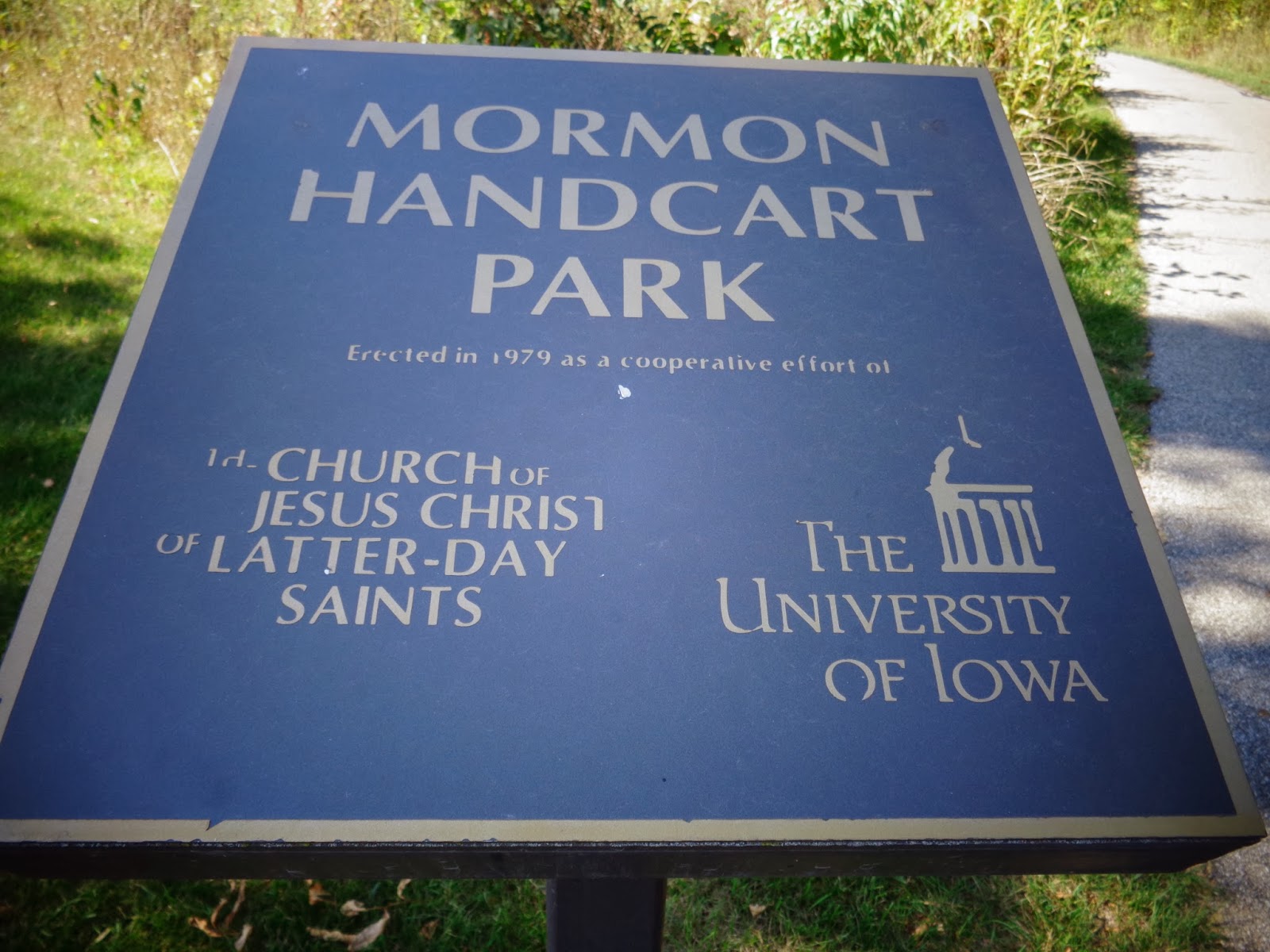 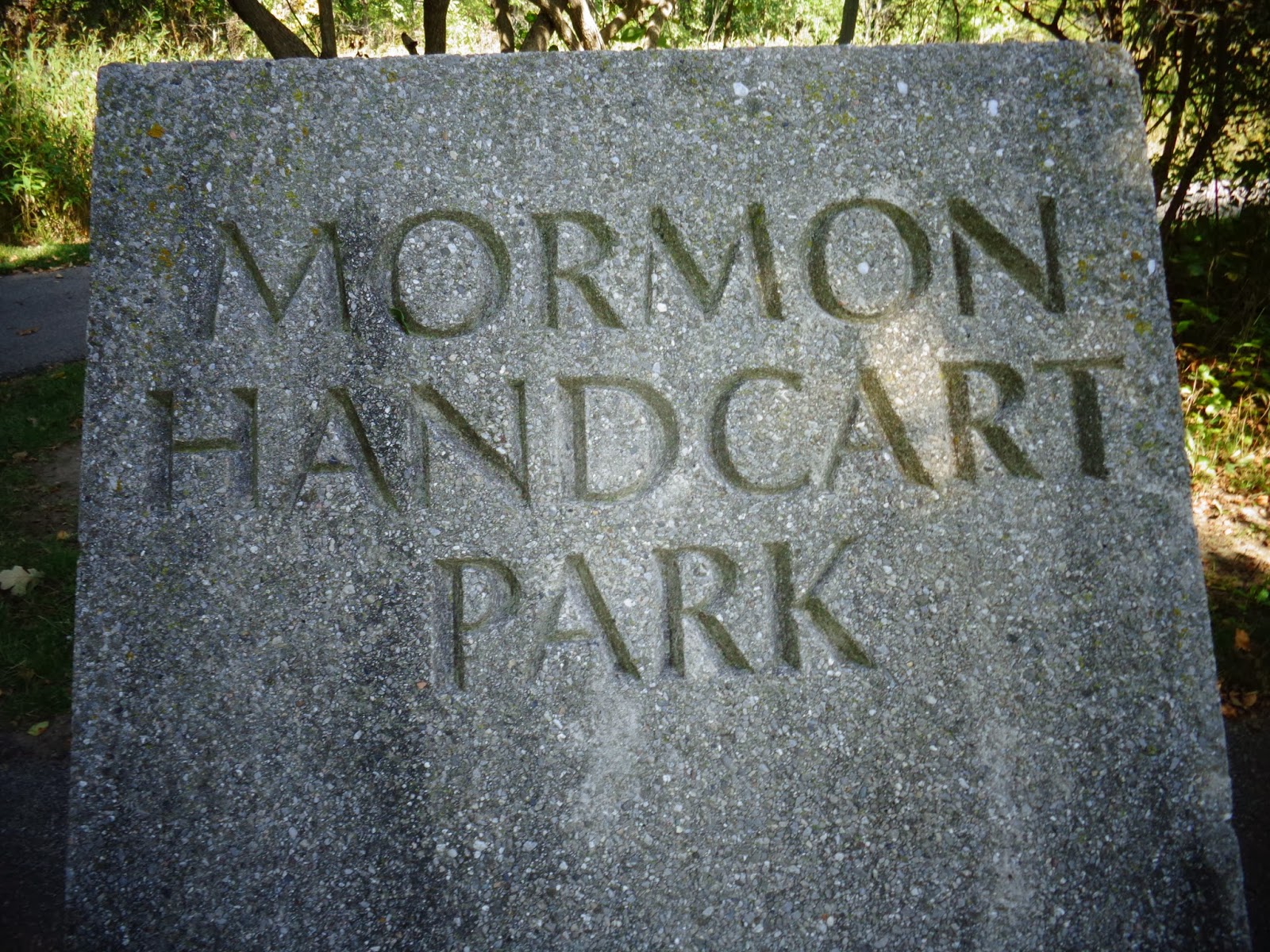 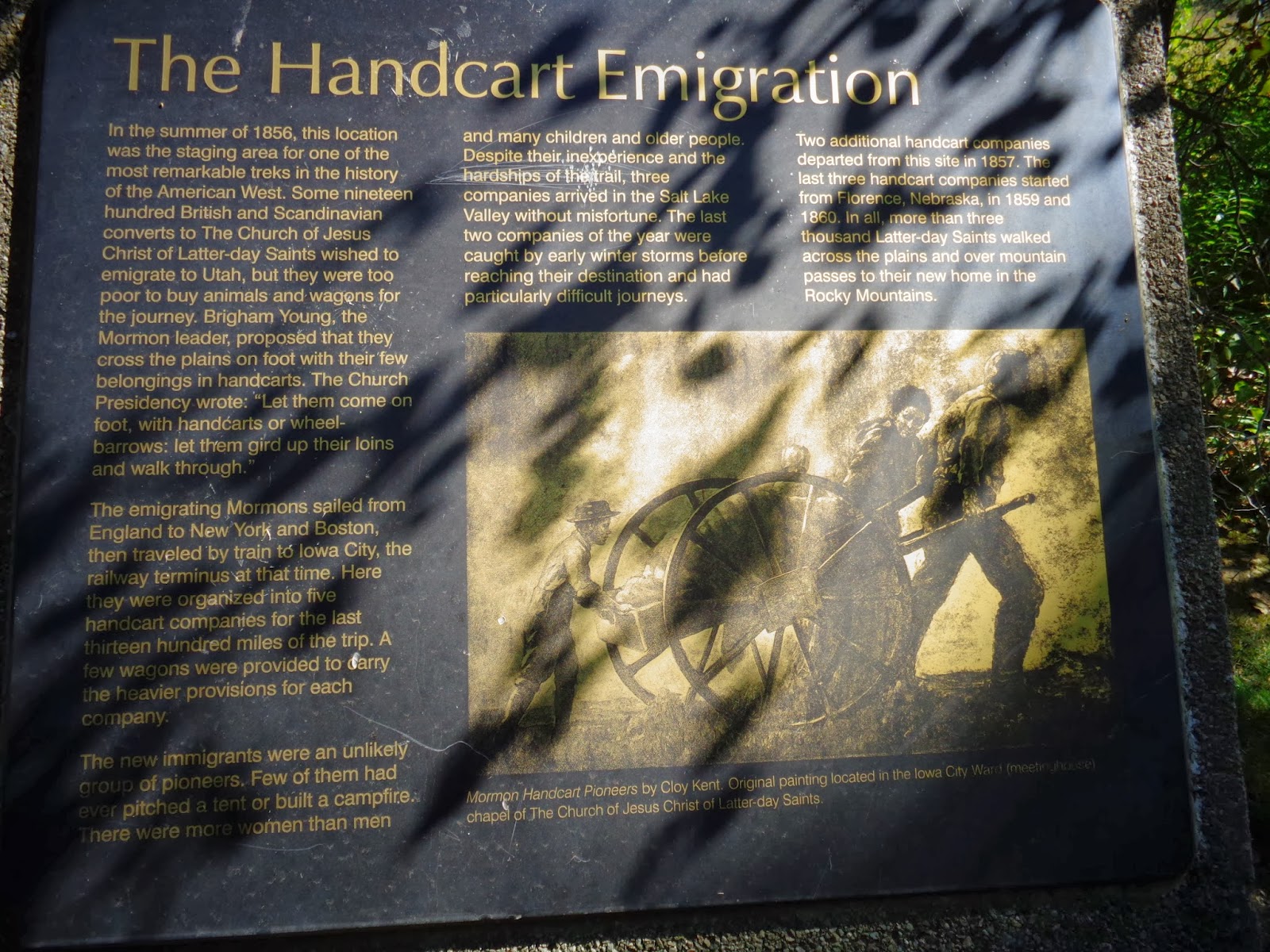 The Handcart emigration:  In the summer of 1856 this location was the staging area for one of the most remarkable treks in the history of the American West.  Some 1900 British and Scandinavian converts to The Church of Jesus Christ of Latter-day Saints wished to emigrate to Utah, but they were too poor to buy animals and wagons for the journey.  Brigham Young, the Mormon leader, proposed that the cross the plains on foot with their few belongings in handcarts.  The church presidency wrote: "Let them come on foot, with handcarts or wheel barrows: let them gird up their loins and walk through."
The emigrating Mormons sailed from England to New York and Boston, then traveled by train to Iowa City, the railway terminus at that time.  Here they were organized into five handcart companies for the last 1300 miles of the trip.  A few wagons were provided to carry the heavier provisions for each company.
The new emigrants were an unlikely group of pioneers.  Few of them had ever pitched a tent or built a campfire.  There were more women than men and many children and older people.  Despite their inexperience and the hardship of the trail, three companies arrived in Salt Lake Valley without misfortune.  The last two companies of the year were caught by early winter storms before reaching their destination and had particularly difficult journeys.
Two additional handcart companies departed from this site in 1857.  The last three handcart companies started from Florence, Nebraska in 1859 and 1860.  In all, more than three thousand Latter-day Saints walked across the plains and over mountain passes to their new home in the Rocky Mountains.

http://billywardlegen.blogspot.com/2010/10/isaac-wardle-history-chapter-seven.html
My writings about the Martin Handcart Company in Iowa. 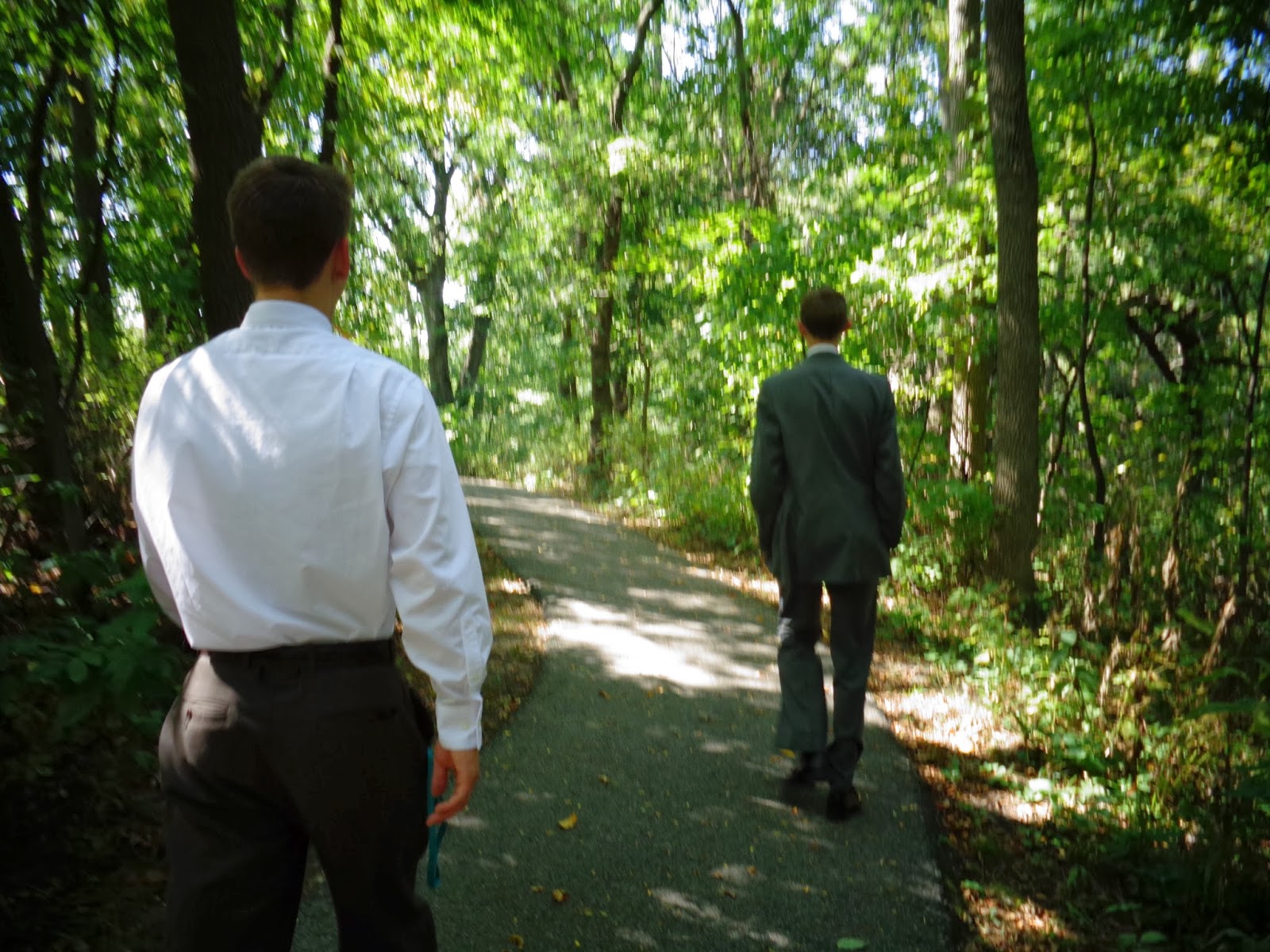 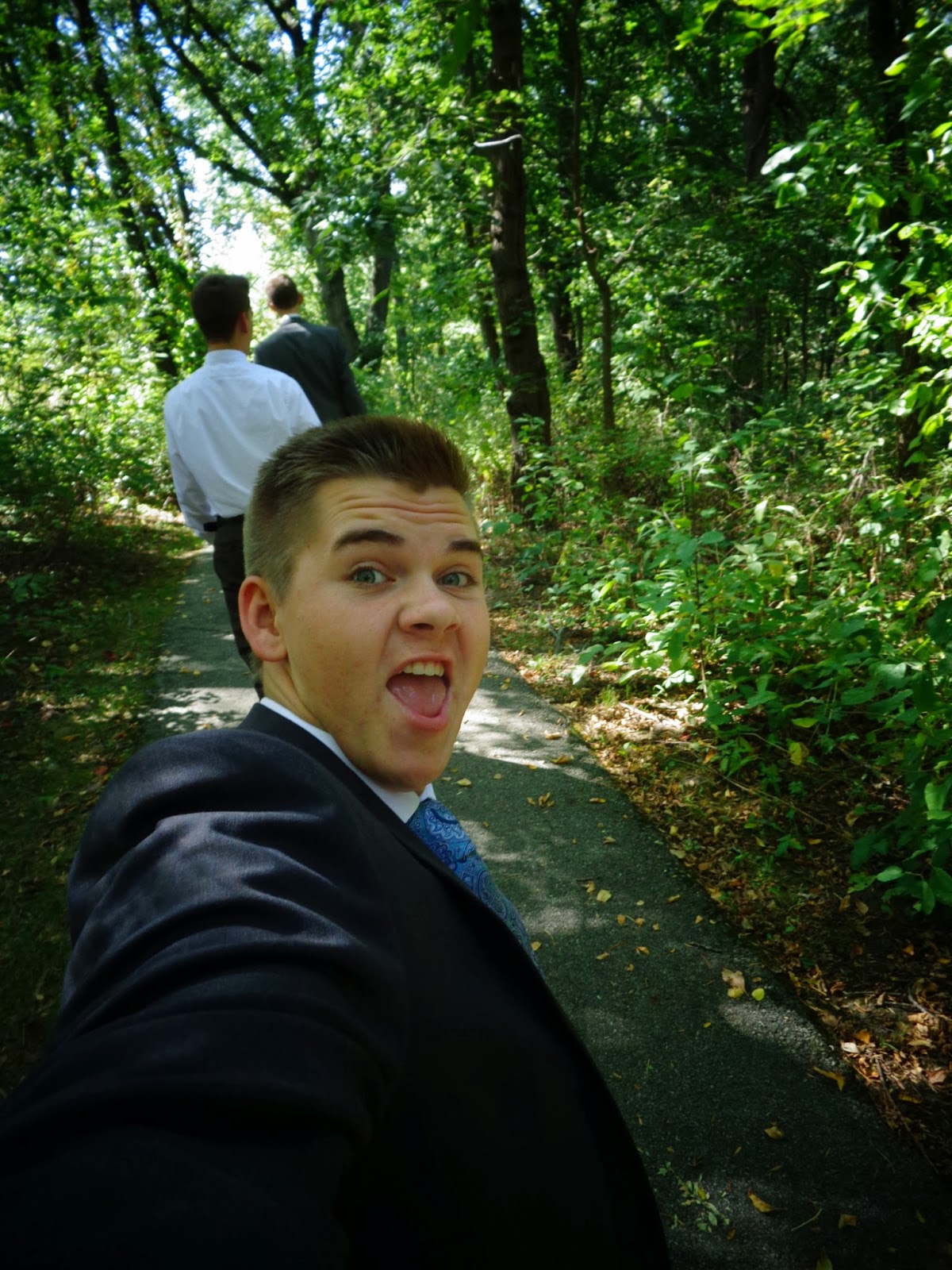 Caleb is walking this ground 157 years after his Great-great-great grandparents Isaac Wardle and Mary Ashton walked on the same ground.  Some of his relatives did not survive this trip, including Mary's sisters, Betsy, Elizabeth and Sarah Anne, as well as her mother, Sarah Anne.  She and a sister, Sarah survived the trip.  Their father joined the infantry at Fort Laramie and did not complete the trip.  Several years later, other ancestors were also handcart pioneers, but staged in Florence, Nebraska.